...and some reconnaissance for future adventures

The last time I was standing on top of the Galatzo was in early 2017 on a hike with a good friend (which turned out to be super long due to a bit of navigation trouble). Over the last few years I always enjoyed seeing this mountain with its distinct shape and rough and steep eastern side - and after some research I figured out that, even though you might think that side is a serious climbing goal, there are a few lines that lead to the top that qualify more as a scramble.

So in mid January 2021 I set off to find my way through the east slope, get back down via the normal way and, as long as I am there, check out two climbing routes up one of the impressive rock towers that are scattered around the peak.

On my way to Puigpunyent (200 MASL) the temperature was around 0 C degrees and the mountains looked gloomy with low hanging and fast moving clouds. This might get a bit more gritty than expected.

The first 6 kilometers from Puigpunyent I followed the hiking trail up to the Coll des Carniceret. On that pass I was greeted with a stiff cold wind coming from the sea and the view of my goal for the day: The Galatzo with the last 150 meters to the top in a thick cloud.

From the pass I continued up the wide spur towards the base of the eastern face at about 800 MASL. My research pointed to a Couloir that leads up steeply towards a final headwall (about the last 30-50 meters towards the top). I actually decided to go up the rock a bit left of the couloir to avoid the wet vegetation in it and reached said headwall. This was the crux of this scramble with maybe UIAA II+ climbing with serious consequences in case of a fall.

After some looking around I decided to continue towards the right and through less exposed and severe terrain and from there to the top rather than taking on the headwall directly. With visibility being about 50 meters I only took the time to add another layer of clothing and devour my summit sandwich before heading down the normal route.

Having completed my primary goal of the day I set sights on the secondary: Taking a closer look at the about 80 meter high Agulla de Forcada rock spire that stands right beside the normal way. Even on my way up I could easily see why the other name for the spire is “El Bisbe” (the bishop) - it does look like the chess piece of the same name, albeit a bit bigger.

There are two trad routes leading up: One from the very bottom (UIAA grade V / ~100 meters) with three or four pitches and an easier one starting half way up (UIAA grade III / ~30-40m / 1 or 2 pitches). On the way down I made my way to the start of the second route to confirm that the grade is reasonable and it did not look too bad. Continuing to further down to the start of the first route I could not figure out the line completely but overall the wall looked climbable from that point also. In other words: I´ll be back.

Tl:Dr: Scattered along the beautiful road leading into the Tramuntana from Caimari this area consists of several crags with more than 120 routes of medium and high difficulty. Worth a visit but finding a place to park can be difficult. 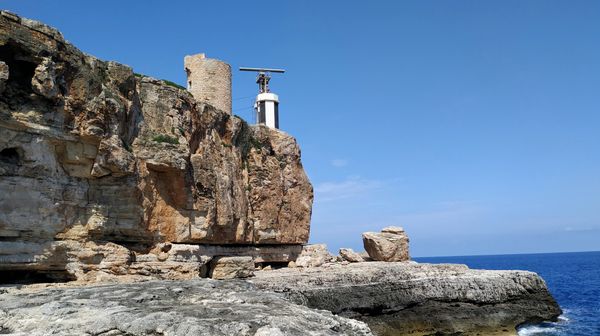 Tl:Dr: Another example of excellent East coast climbing with a wide selection of routes beautifully set right by the ocean. There are also a lot of boulders here if that floats your boat.