The Frare towers over the valley just east of the highest mountain on Mallorca, the Puig Major. This spire tops out at 1.202m which is about 250m above the floor of the valley. The classic route up on the east/valley side starts with a number of fixed ropes and leads into five pitches of up to 5b climbing with gear on the stances but almost nothing in between (expect a few bolts on the 5b traverse pitch). As far as I could figure out the route was opened in January of 1976 and is climbed fairly regularly (e.g. a few times a year).

Both Wolf and I had earmarked this climb independently and in mid December 2022 we finally went out to give it a try (after having waited for the right weather - It can get quite cold and very windy up in the Tramuntana!). We packed fairly light (a few carabiners, expresses, cams and slings) and took two 60m ropes to be able to rappel off quickly either after having done the route or to bail (note that you can get off the very top with a single 60m but you cannot rappel all the way down that way).

The first difficulty of any good alpine climbing adventure is actually finding the route. In this case the approach hike took us about 45 minutes and we did find the fixed ropes leading up to the actual route on our first try. However there is a small, dense and thorny forest to navigate - no issue, but still quite annoying.

After putting on our climbing gear (but leaving the ropes packed up) we started up the fixed ropes over quite serious terrain. After some 80m of elevation we moved away from the ropes and scrambled on towards the actual stance for the first pitch. Now about 120m up the feeling of being „in the alpine“ did set in.

We tied in and I set off for pitch one (45m, 4b) and made my way up the obvious line with the Frare towering over us. The rock quality of this pitch was only soso and I did put in a few pieces both for protection and peace of mind (I have only little experience with self protected climbing).
The second pitch (40m, 4b) still follows the clear way up and ends right before things get fairly steep. Wolf moved up this second rope length without any issues and we quickly changed over for my lead on pitch 3 (4c, 35m). Again nothing too serious but steeper and more exposed than the first two.

To stay on easier ground the fourth pitch (5b, 15m, protected by three bolts) traverses to the right. Wolf made short work of this very exposed bit of climbing that does bring up the heart rate quite a bit.
The final bit (4c, 35m) leads up to the top, the rappel rings and the stunning view in all directions.

A few notes on the climbing: The rock is mostly good (except in pitch 1) and the climbing is fairly graded. The protection is alpine, e.g. stances with two pieces but only a few fairly old pitons in between (except the traverse pitch). There are many good placings for cams and slings (Note to self: Which I should use more!). We took about 30 minutes for the fixed ropes and another two hours for the five pitches.

To get back down there are two options: Either rap towards the coll on the south side and scramble to the rights behind the tower and eventually the fixed ropes form earlier or rap to the coll and find another abseil point about 50 meters further south (clearly visible) and rappel for another 60m towards towards the valley.

We decided to use option two and after putting away the ropes and having a quick bite scrambled / down climbed in a general southern direction over very grippy rock until we reached the valley (the whole abseiling and down climbing bit took another solid hour) and after about a final half hour of bushwhacking and walking we reached our parking spot.

To sum up: A great alpine adventure that does call for many different skills and is definitely worth repeating!

PS: Thanks to Wolf for sharing his experience and knowledge in the many areas of alpinism I am still a total beginner in. 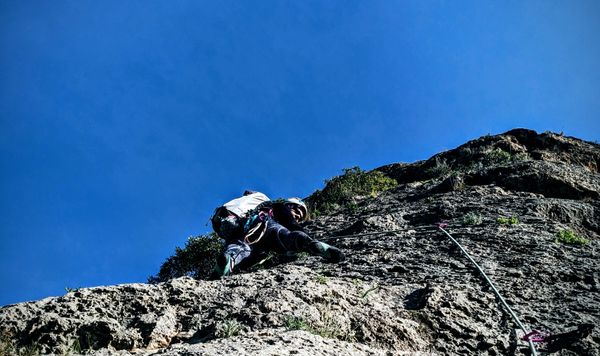 Tl:Dr: A steeper variation of THE multipitch classic in the Sa Gubia crag on Mallorca. The harder pitches are bolted while the rest needs to be protected. 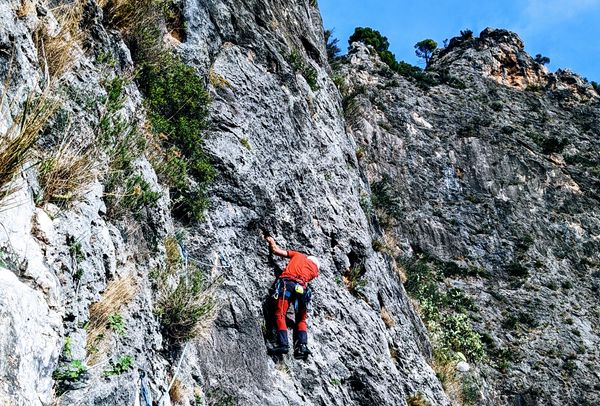 The Sa Gubia crag on Mallorca is well known for its stunning setting and high quality climbing - and the seven pitch La Ley del Deseo is among the jewels here. Sustained climbing up to grade 6a on high quality rock with tons of exposure - my kind of jam!