Cycling, Climbing, Via Ferrata, Hiking and Culture in the Tende valley

During our van exploitation of the French and Italian Maritime Alps we spent four days in La Brigue, a nice little town in a side valley of the Tende valley (or better: Roya valley as the river is called). As we already fell in love with the whole Alp Martime / Mercantour area in the weeks prior our goal was to savor as much of what this place had to offer.

Our base was the Le Pra Reound camp ground run by Jean Louis. He is clearly proud of what he built and rightfully so: lots of space, a makeshift swimming pool in the (kinda cold but refreshing) river, fantastic views all around. All that for a very fair price of 16 Euros for two persons and a van a night. Just stay here - No need to search around.

Cycling
On the day of our arrival I tried to ride up to the Mesches lakes (from which the hikes to The Valley of Marvels start). However here the devastation left by Alex clearly showed: The road is impassible by road bike and would be annoying even by car with all the gravel sections and roadworks. I decided to instead ride up the two small side valleys of La Brigue with their little villages, small rivers, chapels and mills.

The main cycling event of our stay however was the ride up the Colle de Tenda. A bit of background: The tunnel to Italy is closed right now (as of 2022) and the pass itself is very small and unpaved for the last few kilometers (Its 46 switchbacks in maybe nine kilometers are legendary). I did dread the descent on the gravel road (remember road bike. 23mm slick tires) but headed up non the less. In summary this pass might be the most beautiful alpine road I have ridden so far (maybe even beating the Stelvio / Gavia combo). The last five gravel kilometers are in great condition (aka rideable up and down) and the scenery is just ridiculous. However the roadworks in the valley beyond the town of Tende before the divination onto the pass road are rough - dusty, coarse gravel, trucks…

Climbing
La Brigue has a large climbing area with several sectors close to town and in walking distance from the camp ground. With a heat wave rolling over the south of France at the time of our visit we only went climbing once at the La Chappelle sector. The short of it: Well protected and varied climbing on solid rock meets alpine views. However the grading at least in this sector seems off: A 6b that climbs like a 5c right next to a 6a that feels 6b+-ish. In addition the small signs at the base of the routes were all gone, which made orientation quite hard. Still the whole area would provide stuff to do for a week or two easily.

Via Ferrata
The two Via Ferrata we found in the area are in La Brigue and Tende. Both are close to town and both have a small fee (five Euros to be paid at the tourist infos). I would categorize these ways as „modern“ and „sporty“ with lots of metal bolted to the wall, sustained quite overhanging terrain and lots of rope bridges.

Both ways also feature rope slides. The one in La Brigue can be skipped making the whole ways doable even if you do not have the necessary equipment. However in Tende only the first one is optional so that you have to leave the way at more or less the half way point if you do not want to do the second rope slide.

Especially in the Tende the views towards the Colle de Tenda and the small chapel perched on top of a rock tower make the visit more than worthwhile. The La Brigue via is good also if you are into this sort of very „build“ ferrata.

Hiking and Culture
When we were talking to friends during our trip one of them said: „Hey, you guys are in that area? I was there with a research team to look at a chapel up in the mountains!“ -  it´s a small world in the end…

The church in question was the Notre Dame de la Fontaine about an hour of nice woodland uphill hiking from La Brigue. Its internal walls are covered with extemerly detailed and almost graphic paintings of the Christ story. Well worth a visit.

On the last day of our stay we went to Tende to take a look at The Valley of Marvels museum. This free to entry site has been rebuild just a few years ago and gives great context for the thousands of rock carvings that can be found in the area around Mont Bego.

Besides the four days in this location we spent almost three weeks in the Alp Maritime and at least I fell in love. The combination of high mountains, mild climate and just so much stuff to do make for an adventurers playground. It almost does not matter which valley you choose - all them to be just great and we will definitely be back.

Like its cousin the Roya valley over the mountains to the east the Valley of the Vesubie river has much to offer to the outdoor orientated visitor. Tons of peaks, curious wildlife and twisty mountain roads provide more than enough to do! 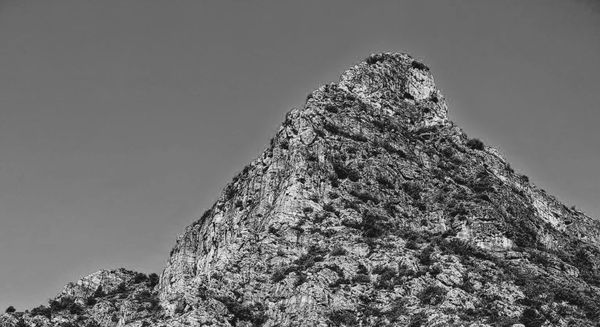 A 2 part multipitch rising more than 300 meters divided among two headwalls of the Mollo de la Creu, in southern Valencia: Named „Homo Marxquerensis“ (I dare you to pronounce that one), this route climbs the - so nicknamed - „Tiny Matterhorn“, beckoning with great fun and views – and delivered!