In early December 2022 I got contacted by Wolf via this website who was visiting the island and looking for a climbing partner. We talked a bit and decided to try a few multi pitch lines that were on my list of „todos“ anyways. Our second outing was the quite well known La Ley de Deseo in Sa Gubia: A sport bolted, 200 meter, seven pitch line of medium difficulty (French 5c or 6a max depending on the topo).

One reason to choose this climb was that in December the southern exposure would allow for quite comfortable temperatures on the wall and when we arrived at the base only the first pitch was still in the shadow. One party was already there and just starting to climb, so we took our time to gear up. With two more parties arriving just after us and also targeting the La Ley I did hope that it would not get too crowded on the wall - but with everybody being very nice and polite this did not turn out to be the case.

Soon after Wolf started pitch 1 (20 meters, 5c and quite polished) and made his way to the first belay without any problems - though the climbing was sustained and hard enough to „Make him wake up“ (in his own words). Pitch 2 was my lead and continued very similarly (still 5c, still a bit polished and around 20 meters).

The climb now eases up for the next three or four (we did the section in four still quite long) pitches (4c, 5a, 4c in the guide book). The last bit of this second chapter of the route moves a bit to the right and ends at a stance right under the hardest bit of the whole route. One feature of this climb is the huge exposure that is almost constant and the stunning view down into the circle of Sa Gubia which gets quite real once you are maybe 100 meters above the deck.

The final part of the route starts with 10 to 15 meters of 5c+ or 6a climbing (this part was a bit of a team effort by Wolf and I) and then eases off for 20 more meters of easier ground. After that there is one more easy bolted pitch (you can continue on for a few meters until to the top of the ridge).

To get back down again we rappelled four times (using two 60m ropes) - making sure not to annoy the parties following us too much. All in all we spent five hours on the wall including some waiting for the party in front of us and not rushing. A quick note: The rock here is almost magically good at grabbing onto ropes and there have been cases of people getting stuck because they could not pull the rappel ropes!

In summary: A really high quality outing both in terms of climbing and scenery. I can highly recommend this route for anybody onsighting 5c/6a and with reasonable multi pitch experience. If this is your first climb in this sector I would suggest continuing onto the ridge and to the top for the walkoff like I did for another route here. 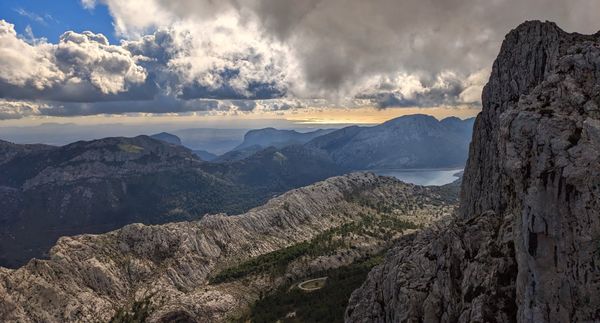 Hiking, wayfinding, scrambling, climbing with the bare minimum of protection, rappelling, a real mountain setting - all that in one go is what needs to be dealt with when attempting this stunning rock tower. Or as my climbing partner Wolf would say: „A tour for the complete Alpinist.“ 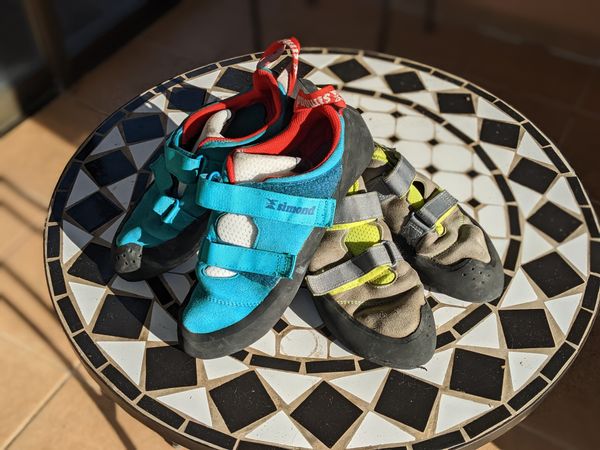 In summary a pair of comfortable, cheap shoes that offer fairly good climbing performance but do lack a tiny bit in durability. Not the right tool for really hard or steep stuff but great as a middle of the road sport climbing and multipitch shoe.