Hi. This is your recurring character, Jost, reporting: You may remember Bengt’s and mine first and so far only joint outing to a multipitch on Mallorca back in 2019. This year, while vacationing together in eastern mainland Spain, Bengt and I finally set out to try ourselves again in a day’s worth of upward stone-hugging. A two part, 8 pitch long climb graded 5/5+ difficulty, Bengt was all confidence about this being the perfect start to our vacation! – Me, not so much. Mind you, this was to be only my second multi-pitch ever (and, on top of that, first rope-climbing and out-of-gym climbing session in 2,5 years!). Remembering the hiccup on our previous multi-pitch experience, I  couldn’t help having some doubts about this endeavor; nevertheless, I trusted Bengt’s assessment, that this route should easily be within the scope of our joint abilities – and since there were days of rain coming, threatening to thwart our hopes of climbing this route altogether on this trip, I agreed to go for what proved to be an at times adventurous 6,5h trip.

An early rise had us start by 9 a.m. from our shaded parking spot onto the very steep, 25 minute approach. First through a shaded hillside olive-and-pine forest, that further up became quite the example of an old-school spanish hiking trail: a tiny path marked by rather unobtrusive spray paint dots scattered among rocks and treetrunks leading us along the edge of a precipice that narrowed into a deep chasm between the mountains. To me, living in the flats of northern Germany, a rocky start in every sense of the word! – Huffing and puffing, I wobbled up behind Bengt until finally the trail widened onto a broad natural terrace where I got to catch my breath before tying in for the climb. Adding insult to injury, just then we got passed by a local wanderer with his dog coming down the trail, not having broken the tiniest sweat. Uff!

There, we encountered some fellow people sportclimbing, too. Chatting them up, it turned out, that among them was one of the fathers of the route we were about to climb: senor Ángel Martin was so kind as to point out some quirks of the route ahead (whose first, lower part has only been established a few years ago and is thus less well known) and gave us his blessing for the day. Muchas gracias!

So there we were: Bengt started up the first pitch of the wall to get a sense of what the given grade actually meant. This very first section takes off on a column protruding from the surrounding, much more sheer walls of sector „deportivo“. The stone on the column is weathered and provides good holds for hands and feet, so he got up easily and I followed suit. Then it was time for me to lead for the first time since 2019 (Sidenote: only after this first pitch did I realize I had climbed in my belay-gloves. So much for routine…). The next section is graded as a blank 5 and is not hard at all and well protected. However, I somehow missed the anchor and ascended into the next pitch until, eventually, I ran out of quickdraws and had to improvise a stance to have Bengt come after me and collect our materiel. That episode rattled my nerves a bit; so once he had joined me, Bengt continued up to finish the pitch rated 5+ and even continued to the top of the first part of the route. Note: this first wall may only be 70m high, but still take at least 13 quickdraws with you!

There on a nice  comfy balcony, we took a 20 minute break, a view of the landscape below and stock of my beginner’s mistakes. All in all, Bengt gave me the impression of not having screwed up too badly (except for leaving a sling behind) and we could dare to face the second, even longer climb on the steep upper ridge to the summit.

Scrambling towards the start of the second part of the climb, we came upon an eerie wooden summit cross from where the path led up. Ever narrowing the further we went, the ridge confronted us with some decent exposure to 40m cliffs on either side of the way. While those must have tickled Bengt’s alpinist senses pleasantly, they were more of a (gentle) shock therapy to overcome any trace of dread of height in me.

Reaching the start of the „Homo Marxuquerensis - Part II“, it turned out to consist of a series of sections stacked like a giant’s stair. This made for easy belaying positions yet also for somewhat awkward leads since the next anchors were hardly ever visible from below and even calling out to another got almost impossible. Tip: take walkie-talkies with you, they might come in handy. The first pitch was rated only 4- but said to be 50m long. Having only 60m of rope with us and my earlier attempt at improvising an anchor in mind, Bengt decided to start off the pitch and provide for protection midway if necessary. Alas, he reached the anchor without any comparable hiccup. After following him, I led the next 20m pitch (rated 4, so quite easy) and found a great place to belay Bengt on the crux section: a steep, 30m+ section climbing the edge of the cliff into a surprising, almost bouldery finish with even more air under your butt than anywhere else on the entire route. Not difficult, really, but after almost 3 hours of climbing, I was tired out – unlike Mr. Endurance belaying me from above, grinning at me while I shakily hove myself up.

After this, I insisted on another 15 minute rest before setting off for the last stretch to the finish line. These last 100m of ascent start with a 45m long, easy ridge scramble that is rated 3 –so easy in fact, protection was almost unnecessary but nice-to-have if you’re still shaky from climbing the previous section. Gradually, the going becomes less easy (4-) until finally, the summit is only a short wall away. This last climb is more of a reminder you haven’t been out hiking than a real challenge (4) and the greatest obstacle here is a weirdly placed, scratchy bush you have no option but to crawl through.

Close by the final anchor, we found a box with a bunch of summit books. We left a thank you note to Ángel Martin and the other fellows at the alpinist club of Gandia before turning to the 50 Minute hike back down. Scrambling down the steep hillside right next of that yawning chasm encountered earlier, we came upon a herd of tame and nosy goats who seemed intent on pestering us for treats. Since they were more surefooted than we, it took us a little bit of careful treading around to find the way down and not be shoved foreward by the greedy but cute beasts, before we eventually rejoined the path we had used to come up. Back in the car, a look at the clock proved this trip to have taken almost 6,5 hours – all in a days work. - Last note on this: if you go for this in winter, start early as not to face the hike back down in darkness!

So there you have it, my recount of Bengt’s and my second joint multipitch adventure. A great experience and rewarding challenge in itsself while also being a great motivation to further expeditions later in this vaccation. Before signing off, all that’s left to say is thank you to Bengt for taking me along and to you for reading this blog. Until next time. 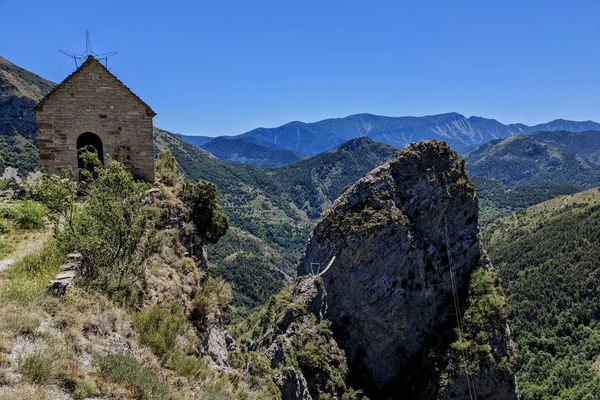 The valley has been hit hard by the storm Alex in 2020 and it still shows. However this means that the area is quiet and the many outdoorsy activities you can do here are not crowded at all. And all of the alpine beauty is still there!

After trying our hand in a multi-pitch line we had the chance to sample some of the sport climbing spots around Gandia in the Valencia region of Spain. And in short this area has Michelin grade quality and variety climbing on offer. So here it is: our little taste of everything around Gandia.