From the point of view of a rock newbie, how some would want to lock up in the climbing gym
„Tilting the body forward and dragging the feet behind…“ - not through the city of Hamburg but up to the foot of the Totenkirchl. Like the original authors - Fischmob - of the cited line (Bengt: I do apologize sincerely for butchering the translation of the original German!) our little group might be more used to the flatlands than this roughly 500 meter climb. Jochen and Bengt carry the ropes on their backs while Julia and I schlepp the lack of responsibility.

Our destination of the day (and part of our August 2022 summer climbing trip) was the Wildanderwandl which, as opposed to the „Hamburger Berg“ where people only try to claw tight on to the bar, calls us with the promise of sport bolted multi pitch climbing graded UIAA 4 to 7+.

During the approach we were rewarded by the beautiful views towards the striking peaks of the Wilder Kaiser range (one of the birthplaces of Alpinism). However this impression could not hide that the general fitness level of the team „Moanin“ does have a bit of potential for improvement (except for „Duracell“ Bengt). After about 1.5h we took the last huffing and puffing steps to reach the crag in „sunny side of Venus level“ heat. As stunning as the range is, it was quite telling that there was only very little snow left right below the north face - a reminder that the climate does change even more quickly in the mountains, but let’s not warm up the old issue.

At the main face of the crag there were just a few other rope teams and we had a buffet of routes to pick from. Jochen and I decided to start of with the „Via Christine“ (3 pitches rated IV) while Julia and Bengt jumped on „Cola Light“ (3 pitches, V). Jochen had explained a few additional techniques (like belaying of a fixed point with a HMS / Munter) during our sport climbing outing in Flintsbach the day before - thanks again for the free lessons. Julia and myself, besides our existing outdoor experience, had also taken a course focused on moving from the gym to real rock a few weeks earlier. In summary we felt well equipped and prepared for what was awaiting us here (in my case the pro would collapse his hands on his head XD).

Jochen seemed to think the same and graciously let me lead all pitches. The route is bolted well and even though I am not that versed in leading (yet) I made my way up with the elegance of an elephant, the smoothness of a giraffe and the speed of a sloth.  Still I made good progress (even though I am not known for my speed record climbing). The rock has more piercings (aka bolts) in it than the average squatter punk - which makes climbing comfortable and wayfinding easy. After some time Jochen started to get a bit impatient and asked whether I was close to the first belay. I (being more familiar with the Ith style bolting of northern Germany) was not sure how exactly the belays would look like here and I had a short conversation with a climber on the route next to me who assured us that all belays consist of two bolts. And shortly thereafter I saw my target (two shiny bomber bolts) - however the very last bit of this pitch was my personal crux (inject the old T-Rex climber joke here if you have to). After some trying I finally reached the stance and started to belaying up Jochen. Now being in the flow we made short work of pitch two and three. The route actually does have quite a few different types of climbing on offer and is just fun. Maybe the grading was a bit off but still fair.

As we were getting ready to abseil the route we saw Julia and Bengt (who had finished their climb of Cola Light already) start the Via Christine. Maybe to have us take hero pics while they were going up (Bengt: Guilty as charged). After a shenanigans fist bump between Jochen and Bengt (meeting on they ways down and up respectively) we reached terra firma again.

Some time later Julia and Bengt also got back down and they relate an episode to us that they had while being on Cola Light. They had been waiting at the last belay to abseil down while a guy (seemingly a guide with a client) was trying to get his second up. A few small pebbles had made their way down towards their general direction and the dude was scolding Julia and Bengt for „being not careful enough“ and that this „is not a climbing gym“. Quite funny knowing that Bengt has never seen a gym and the colorful plastic holds inside. Oh well - Live and let live.

We took a short lunch break and switched to another wall called the Gamswandl. Jochen and I went over there first - with some hesitation as the wall was in bright sunlight (right at the point of moving out of the shade Jochen stopped like Nosferatu himself). After some further encouragement we decided to start up one of the routes with Jochen on lead this time. I have to agree with him(even climbing as a second) that the temperatures on the wall were a bit much to be fun (my pale northern German IT guy skin is not made for this kind of abuse).

Julia and Bengt had arrived a short while later and climbed the neighboring two pitch route. However as they reached the top and Bengt had already abseiled back down Julia noticed that she liked the view from the belay so much that she screwed down the carabine of her personal anchor completely tight. All tries to get it back open where moot and Bengt reclimbed the route to try to help her - at first to no avail. However after thinking through the alternatives (all bad) he gave it another try the damn thing finally came loose (Bengt: And that’s why one should always carry a knife!).

After all of the climbing and this final little adventure we decided to start the descent back down to the car. Spent but happy about having had a great day at a very worthwhile crag. 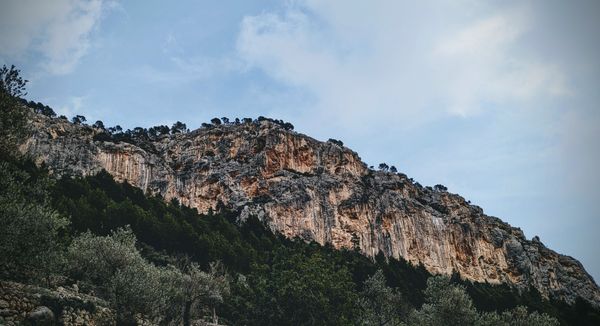 In our quest to discover and climb multi pitches on Mallorca Wolf and I attempted a very interesting line close to the village of Alaró on the foot of the Tramuntana. With only a rough topo and a single photo of the route Pepe Ramon we knew this would be quite the adventure. 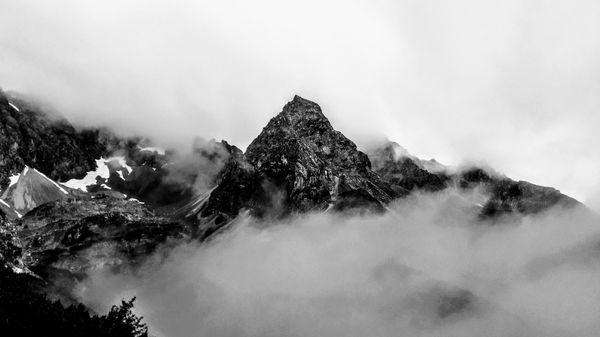 The Japanese word „Ma“ can be translated as negative space, the concept of silence or the potential for thoughts or things to develop. This text speaks about how being outside in nature silences the noise and clutter of the mind and makes space for real experiences and a clearer view insight.