Tackling one of Catalonias most famous mountains in just-so conditions

During our March 2022 van trip through Catalonia and Valencia I had packed crampons and an ice axe to maybe do some ascents in the Val d´Aran. However the weather was less than great during the whole trip and we had to scrap that idea. Not to have brought the stuff for nothing I decided to give the main summit of Pedraforca a try on one of the few days with less chance of snow and strong winds.

Pedraforca is not that high and quite easy to access with a small road leading up to a viewpoint about 950 meters below the summit. Looking at the descriptions of the normal routes up I had the choice between the west ridge (starting at the Coll de Verdet - 2.200 meters) or the easier southern approach that mainly leads up the space between the two summits.

Looking for a proper day out I chose the ridge and started off from the viewpoint. Only a few minutes later, at the Refugi Lluís Estasen (1.700 meters), the first pits of snow had stuck around. From here the trail traverses under the impressive north face of the mountain and climbs first gradually and then very steeply towards the Coll de Verdet.

At maybe about 1.800 meters the snow was deep and I followed the footsteps of a few people that had been here before. As the going got steeper and more exposed towards the Coll I switched from hiking poles to the ice axe for a bit of added security.

Until now the temperatures and visibility had been quite good. However looking up the Coll was already in the clouds and the wind was picking up with every meter climbed. As I reached the Coll the conditions had completely changed: Biting icy wind and poor visibility! However the footsteps I followed were still there and I put on the crampons to continue on the ridge towards the summit.

The ridge itself is a bit of a scrambly affair in the summer and signs warn hikers not to underestimate it. In winter most parts are well snowed in and, if you are comfortable moving on steep snow, quite fun. There are two very steep parts that are a mix of snow and rock early on that I did really enjoy.

About halfway up the ridge I passed two locals (who will play a bigger part in this story soon) who were taking a quick break and after a very short chat I passed and continued on - now only following a singular pair of footsteps. After another quite exposed section the steps went down towards the southern face quite a bit and then disappeared completely. About 20 minutes of searching around and climbing up a sketchy couloir later I decided to go back a bit and see whether the two „locals“ knew the way. Only a few minutes after turning around I met the two guys taking a break earlier.

Let me introduce Raúl and Martí who turned out to be my climbing buddies for the rest of the way up. Both had climbed Pedraforca in summer before and after some back and forth we continued towards the point where I was before and chose to go further down into the Southern face to then find a way up towards the summit (we were some 60-70 meters below the peak according to GPS).

The decision was taken to try to move up a couloir and Martí took up the task to break trail on the deep and crappy snow. About 20-30 meters of elevation later the couloir split up into a left and a right hand. Martí checked out the left hand while I looked at the map again and determined that the steepening right one should lead up to the summit. Taking up the trail breaking I moved up the right hand couloir  - which was really tough going due to the crap snow, steepness and rocks poking out.

However after some time of fighting and cursing I could hear voices above me and a few minutes later I could see people who did confirm: „Sí, eso es el cumbre!“ „Perfecto!“. After reaching the summit I waited for the other two who fought their way up a few minutes later.

Everybody on the summit had come up the less severe southern route. We seem to have been the only ones coming via the ridge (especially our little „variation“) at that point.

Raúl, Martí and I split ways on the summit and I started the descent via the southern route (which was definitely much less exposed, less steep and easier). Most of the way down was on soft snow which I straight-lined and made good progress to be back at the viewpoint about five hours after I had started.

The Serra de Montsant is blessed with several world class climbing areas but even with Margalef and Siurana close by La Mussara can stand its ground more than well. 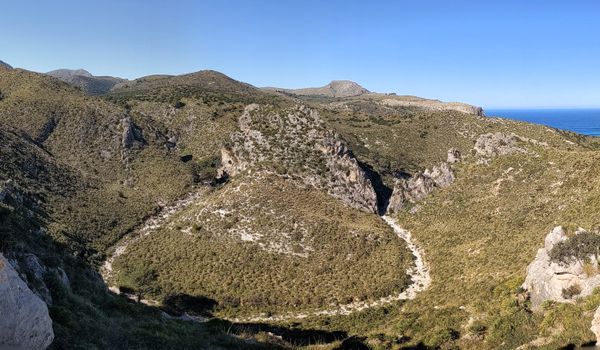 The north-east of Mallorca has its own small mountain range that is much less well known than its bigger brother the Tramuntana. However there is a lot to discover here too - like this remote canyon.