Getting to know one of the mountain playgrounds of Germany

For our little summer trip in 2021 we chose to base ourselves in Mittenwald with the plan to climb some easier multi-pitch in the surrounding mountains. For a little bit of background - there are two main hotspots for alpine fun and games in Germany: Berchtesgaden in the far southeastern corner of the country featuring the mighty Watzmann and the area around Garmisch Partenkirchen and Mittenwald with the Wetterstein (including the Zugspitze), Karwendel and Ammergauer Alpen ranges. And having climbed in Berchtesgaden already, checking out the other area seemed like a good idea.

I met up with Jochen and Buddel in the town of Regensburg, where I was spending some time anyway, and with the weather looking dodgy in the Mittenwald area for that day we decided to visit the local crag in Schönhofen to check if the system I chose for climbing with a party of three would work properly and to go over some technical things, like rappelling, again.

Our system for three person multi-pitch this week was:

After having moved our base camp to rainy Mittenwald during the afternoon of the first day we checked the weather for the next day and deemed the fairly mixed forecast good enough to try a three pitch route up the Kofel (UIAA 4-) in Oberammergau called “Linke Achsel”.

Day 2: Diving into the alpine deep end on the Kofel

After hiking up the steep trail and searching for the entrance of the route for a good hour we scrambled up over grassy and muddy terrain (rated UIAA 2) towards the proper start of the route. Just as we finally had the ropes out and I was starting the slabby first pitch the rain started to come down - and after some internal debate we decided to call it quits on this route. So down again over the grassy UIAA 2 bullshit (we rappeled the worst of it to be a bit quicker).

Luckily there was a second route indicated on the topo: A short two pitch UIAA 4 hop up the Kofel Turm - a free standing tower further up the mountain. Not wanting to leave empty handed we started searching for the tower and after some bushwacking finally found it. The rain had stopped and the route looked pretty cool and exposed (just as at least I like it - I could have done without the loose rock on the first pitch though). So half an hour later we were all anchored around the tiny top of the tower and soon after rappeled back down.

In summary a proper alpine day: Tons of scrambling, getting rained off a route and finally sending another!

The weather looked pretty bad for this day and we looked up an easy to reach sport climbing area in Garmisch Partenkirchen to get in some climbing in between rain showers. Weather being what it is, we actually spend the whole day in the areas of Herrgottschroffen and Frosch.

After having tipped out toes into proper alpine stuff on the Kofel the 10 pitch Soldatenweg up the Predigtstuhl would be another big step up. With perfect weather forecast we set out early to hike up to the Dammkar-Hut: Nothing but 800 meters of uphill to get the day going. From there finding the route was easy - as you can see the line on the Predigtstuhl from the hut itself - With that vantage point it looks impressive (and maybe a bit intimidating). In good spirits we set off and after some rope hassle on pitch three we got into a good groove. For me the most difficult thing was the route finding as there are other (harder) routes intersecting with the Soldatenweg.

Five  hours of climbing later we reached the top of the route, packed our stuff and hiked up the last 50 meters of elevation to the peak itself - High fives all around!

The way down to the Dammkar hut was mainly on well surfable scree fields and from there we followed a well trodden hiking trail back down to Mittenwald and our base camp.

A long (11 hours in total) day that had it all: A proper approach and descent, nice alpine climbing and stunning views.

With more rain predicted for the afternoon Buddel and I went out to take a look at a local Mittenwald crag. As it turned out this old marble quarry had just one sector: A almost blank slab featuring routes up to UIAA 7 difficulty. Putting the saying to shame that “everybody hates slabs” Buddel and I had our fun carefully tiptoeing up this piece of rock for some hours.

In summary we climbed every day, saw some beautiful mountains and did not get into any really scary situations - A full success in my book!

PS: I can recommend the whole area for any type of mountain goat. There is more than enough climbing, hiking, mountain biking etc. on offer here for many many vacations!

Cycling up long steep alpine roads might sound like madness for most people - but for some this is what we call a very good time. I had the chance to ride some of the most iconic climbs of the French alps and yes, that part of the world is as stunning as it looks in the Tour de France. 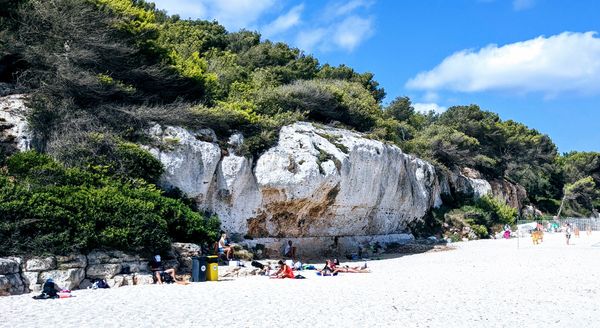 Tl:Dr: A nice pocketed wall right by the beautiful beach to play around on in between swimming and other beach shenanigans.