For this years summer alpine trip we selected the area south of Rosenheim in Germany to explore - and the iconic Kampenwand had to be high on our list of things to tackle. This 500 meter long ridge is broken up into several distinct peaks that have to be climb up, scrambled over and rapped down from east to west. Technically this line (follow the link for the topo) is rated a UIAA 4+ but knowing how old alpine lines are rated I already assumed the climbing to feel harder and the protection to be less than stunning - turns out I was right.

We split up our rag tag team of four people into two rope teams (Buddel and Jochen on a 70 meter and Julia and I on a 60 meter) and started the actual route at around ten in the morning - assuming that we would have plenty of time for the nominally eleven pitches. The climbing starts easily enough and after my first lead through maybe UIAA 2 ground I continued into pitch two to encounter a maybe 5 meter polished as hell and tight little chimney (later I figured out that this bit is rated 4-, however it felt more 5+ish). Julia followed and fought up the hard bit valiantly and after switching over our gear she headed into pitch three (3+) that is dominated by a steep corner with little protection.

During her lead Buddel reached my belay (also having quite the trouble with the chimney) and to give him space I pointed out the way for pitch 3 and headed off. Buddel had left his backpack at the bottom of the chimney and he and Jochen had to get creative to get it up - which as we later heard cost them quite some time.

Having reached the end of pitch three we already saw the ground getting much easier (UIAA 1-2) and after I moved on lead for a few meters we decided to switch over to scrambling / simul-climbing mode - both moving with a few meters of rope between us over the west peak. Here the sheer beauty of the landscape really hit us: The Bavarian plane with the Chiemsee to the north and the many peaks of the Alps to the south. On this day we could see the Wilder Kaiser, Großglockner and as far as the Großvenediger.

Besides stopping to marvel and taking photos we still quickly reached the bottom of the next tower on the ridge called the Gmelch. This little dip is only a few meters high and maybe 20 meters in terms of west / east length and we decided to stay in our quick move mode and scrambled around it to the base of the real next challenge: The Teufelsturm - the devils tower.

Getting up the tower required climbing an very exposed and poorly protected (one bolt that is hard to reach) rated 3 pitch - my lead this time. I would rate it maybe a 4-, mainly for the exposure. However if you like that stuff (and I do!) its great. Right after this pitch we reached the first rappel of the line that is noted as 35 meters in the topo but can we done with a 60 meter rope when rappeling a bit further to the north than indicated.

Before the next technical bit we decided to make use of the shadow for hour lunch break. We had made good progress but had lost sight of Jochen and Buddel some time ago. However a bit later we saw two figures on the western peak and assumed them to be moving a bit slower but at a good pace and so on we went. A quick second rappel (10 meters) to reach the bottom of the deep V cut between the devils tower and the main peak. We had to wait to start the second to last technical pitch up another 25 meter corner (Julias speciality and she took the lead again) protected by three measly bolts. Here the rating of 4+ seemed off again due to the age of the route and the polished hand and foot holds but after a scary slip quite a bit above the last clipped bolt (that she held through sheer force of will) Julia got to the belay.

After having been bombarded with rocks during our wait to start the pitch before by another rope team we quickly changed over as we did not want to throw rocks on Buddel and Jochen or who after might be coming up behind us. This pitch up to the top of the main peak was completely unprotected and a fair but crumbly 3 on the UIAA scale.

Another 60 meters of simul climbing a quick rappel and a funny little easy slab later we were sitting on the main peak munching on some bars and taking in the scenery. From here the route is a scramble / easy climb down to the base of the east peak from where we took the hiking trail down to the Steinling Alm.

So what happened to Buddel and Jochen during all this? That was our main concern when we finally reached the Alm about four our after starting the route. We knew that there was almost no mobile reception up on the route itself and so we scanned the peaks until we noticed two people at the Gmelch tower and after much squinting and staring we were certain that those were our two friends. A bit of quick math and estimation later we were pretty sure that at that pace they would have a very hard time to get through all of the route before dusk.

Our concern grew until finally after many tries we reached them on the phone and they told us they would move around the Teufelsturm and take the alternative way  down towards the north (also indicated in the topo) via two rappels at the base of the main peak. Honestly the shoot they were planning to rappel looked very steep and I did have doubts about what would happen if there wasn’t a belay station half way down. Luckily there was and about two hours later we four were united again. In hindsight Buddel and Jochen did have more of an adventure then Julia and I and had to actually use their heads and skills to get out of a sticky situation. Chapeau to that!

Happy is what ends happy, even though we had missed the last cable car down to the valley and had to drag our tired bodies down the 800 meters of elevation.

In sum: A fantastic day in the mountains among friends on a classic line. 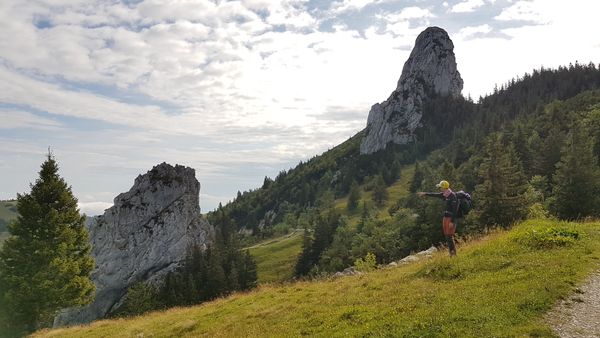 Besides the classic Kampenwand traverse there are many other cool climbs to be done close to the main ridge. The Staffelstein is a prominent and striking rock tower that overlooks the Chiemsee and has several lines leading to the top. We chose one of the Nordwest Kante and enjoyed it profusely. 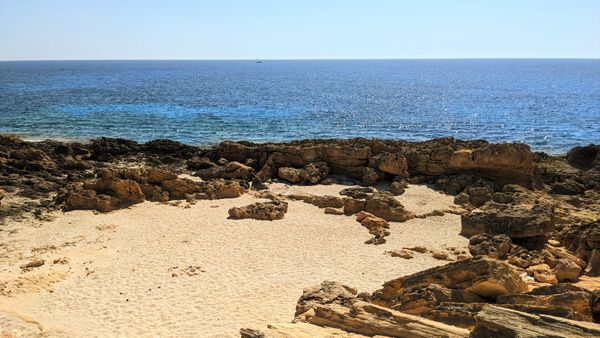 Steep and juggy boulders with sandy landings in a bizarre setting right by the sea on the east coast of Mallorca.